June 19th is Juneteenth, a day set aside to commemorate the day Texas slaves first learned about emancipation, more than two years after President Lincoln signed the emancipation proclamation. Union army general Gordon Granger made the announcement in Galveston on June 19, 1865, making Texas the last state to hear the news. Juneteenth is a crucial piece of the complex series of announcements, documents and events that eventually lead to the passage of the 13th amendment:

Neither slavery nor involuntary servitude, except as a punishment for crime whereof the party shall have been duly convicted, shall exist within the United States, or any place subject to their jurisdiction.

Juneteenth National Independence Day is a United States federal holiday. It was signed into law by President Joe Biden on Thursday June 17, 2021. Listen to Open Lee, the activist who is known as the "Grandmother of Juneteenth," reflect on her efforts that are credited with the day being officially recognized. Lee is a retired teacher who walked from Fort Worth to Washington D.C. in 2017 at the age of 89 to call attention to her quest. To learn more about Opal Lee, check out, Opal Lee and What It Means To Be Free: the True Story of the Grandmother of Juneteenth.

The Center for Black Literature & Culture's 5th Annual Indy Book Fest and Juneteenth Celebration will offer a glimpse of the African American experience through arts, literature, and storytelling on June 18 at Central Library. We are bringing together poets, visual artists, storytellers, musicians, and book clubs to emphasize cultural literacy! We are excited and honored to partner with the YMCA's Monster Meeting to welcome via video, Professor Annette Gordon-Reed, author of the Pulitzer Prize winning The Hemingses of Monticello: an American Family and On Juneteenth.

Remembering the History of Emancipation

In this 2013 NPR News interview What the Emancipation Proclamation Didn't Do, Lonnie Bunch III, historian, founding director of the Smithsonian's National Museum of African-American History, and current Secretary of the Smithsonian, said the following about remembering the history of emancipation:

"Well, I think that on a very specific notion, I would love people to realize that African-Americans were agents in their own liberty. I think that that's an important piece, rather than simply the notion, if you look at the movie "Lincoln," it seems as if Lincoln freed the slaves, rather than it's part of a complicated nuanced puzzle that led to emancipation.

But, I think the other part that's so important to me about this moment is this is a moment for Americans to remember that you can believe in a change that you can't see. That the Emancipation Proclamation, slavery was something that everybody knew was going to exist forever except for a few fanaticals. But suddenly the Emancipation Proclamation began America on a trajectory that ultimately led to a fundamental change in citizenship and equality. And so what I hope is that people would realize that they have a right to demand and effect change because change is possible in this country."

Today slave narratives are seen as first person stories about one of the darkest times in United States history, but when slave narratives were being published in the 1800s they were a powerful tool used in the fight for their own freedom. Through their stories they were able to contradict the slaveholders’ favorable claims concerning slavery. Through these narratives they could tell the horrors of family separation, the sexual abuse of black women, and the inhuman workload. The narratives told of free blacks being kidnapped and sold into slavery and the tales of escape, heroism, and betrayal. The narratives helped show the humanity of the most dehumanized people in the country. Narrative of the Life of Frederick Douglass

Physical abuse, deprivation and tragedy plagued Frederick Douglass's early years, yet through sheer force of character he was able to overcome these obstacles to become a leading spokesman for his people. The Interesting Narrative of the Life of Olaudah Equiano

&quot;Equiano’s book was notable because he could write about his childhood in West Africa before he was captured, and he described the horrors of the trade of enslaved people from the perspective of one of its victims. The arguments Equiano made in his book against the trade were used by British reformers who eventually succeeded in ending it.&quot; - Robert McNamara 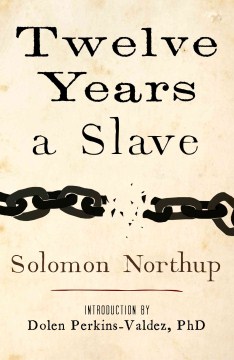 Narrative of Solomon Northup, A Citizen of New-York, Kidnapped in Washington City in 1841, and Rescued in 1853

One of many tragic stories of a free black person being tricked and sold into slavery. Northup's memoir was so powerful when it published it sold 27,000 copies in the first two years being printed and translated in French, German, Russian, and Dutch.