Kadir Nelson is a painter, illustrator, and author well known for his work featuring African-American culture and history. Just a few weeks after high school graduation his career was launched as a conceptual artist for Steven Spielberg's film, Amistad. Since that time he has had work featured in both Sports Illustrated and National Geographic, painted numerous covers for The New Yorker magazine, and created cover art for albums by the recording artists Drake and Michael Jackson. His paintings include a portrait of Shirley Chisholm which hangs in the US Capitol Building and other works shown in the National Museum of African American History & Culture and the Baseball Hall of Fame.

In addition to these distinguished accomplishments, Nelson has also authored and/or illustrated over 30 books for children. His most recently published illustrative work, The Undefeated, is a poetic love letter to black America written by Kwame Alexander. The Undefeated was recently awarded both The 2020 Randolph Caldecott Medal and the 2020 Coretta Scott King Award for Illustration.

Books will be available for purchase at the event with Kadir Nelson available for book signing. The lecture is free to the public, but tickets will be required for admission. Stay tuned for ticketing information.

“I feel that art’s highest function is that of a mirror, reflecting the innermost beauty and divinity of the human spirit; and is most effective when it calls the viewer to remember one’s highest self. I choose subject matter that has emotional and spiritual resonance and focuses on the journey of the hero as it relates to the personal and collective stories of people.“ Heart and Soul: The Story of America and African Americans We Are the Ship: The Story of Negro League Baseball

The Marian McFadden Memorial Lecture Series was established after the Library Foundation received a gift from the estate of Marian McFadden, Director of Public Libraries in Indianapolis from 1945-1956. This annual author lecture series, which typically takes place in the Spring, was named in her honor. 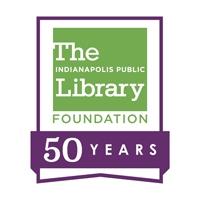 Made possible by Friends of the Library through gifts to The Indianapolis Public Library Foundation.