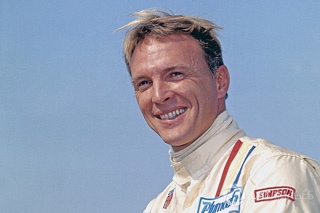 Racing fans of all ages are invited to enjoy a series of vintage racing films highlighting the history of the Indianapolis Motor Speedway and the Indianapolis 500 during the "Indy 500 Film Festival" in May at the Irvington Branch, 5625 E. Washington Street.

The theme for this year's film festival, now in its 10th season, is the incredible career of the legendary Dan Gurney as a driver and car builder. Gurney, who died earlier in 2018, competed in nine Indy 500's beginning in 1962 and finished second in 1968 and 1969. Gurney won races in the Formula One, Indy Car, NASCAR, Can-Am, and Trans-Am Series. In 1967, after winning the 24 Hours of Le Mans together with A.J. Foyt, he spontaneously sprayed champagne while celebrating on the podium, which thereafter became a custom at many motorsports events.

The highlight films shown in the series, approximately 30 minutes in length, are produced by First Turn Productions and Rare Sportsfilms for presentations at service clubs, schools and advertisers. This year's film lineup includes:

How can we help?

Outreach Services brings the library to your neighborhood.