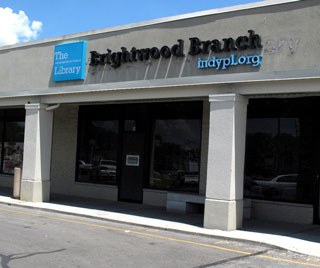 Brightwood neighborhood residents on the city's near eastside are invited to offer their suggestions on plans for a new 15,000-square-foot branch of The Indianapolis Public Library during a pair of community engagement meetings on Thursday, February 1 at 6 p.m. at the current Brightwood Branch, 2435 N. Sherman Drive, and on Thursday, March 1 at 6 p.m. at 37 Place, 2605 E. 25th Street.

Following last month's agreement to acquire separate tracts totaling 2.3 acres at the intersection of E. 25th Street and N. Sherman Drive on which the new library will be built, Library officials will seek public comment on services, programs and design features considered important by neighborhood residents. The interactive meetings will be led by architects from Axis Architecture + Interiors and Meticulous who will accommodate ideas in their design plans.

The new Brightwood Branch, scheduled for construction in 2019 with a targeted opening in early 2020, will replace the undersized storefront library in the Brightwood Shopping Center located across the street from the proposed new location which has served the community since 1972. The new branch will offer modernized spaces for an expanded collection, early literacy programming, job search assistance, public access computers and community meeting space.

Individuals can learn more about the Brightwood Branch project and other capital projects by visiting indypl.org/renovations