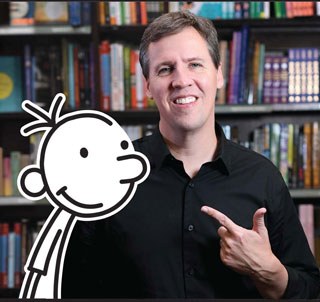 Families and individuals of all ages are invited as acclaimed author and illustrator of the Diary of a Wimpy Kid series for children and teens Jeff Kinney presents The Indianapolis Public Library's 2018 McFadden Memorial Lecture on Thursday, March 15 at 7 p.m. at Central Library, 40 E. St. Clair Street. Kinney will discuss his development of the award-winning series and conduct a book signing for attendees following the program.

The Diary of a Wimpy Kid highlights the struggles of a boy named Greg Heffley as he tries to fit in at middle school. It has been a fixture on national bestseller lists, including the New York Times since 2007 when Kinney's first book was published. The books are currently available in 61 editions in 52 languages, and its online version is typically read by more than 70,000 children a day.

Described as a satirical and realistic fiction comedy novel, Diary of a Wimpy Kid has won two Children's Choice Book Awards and six Nickelodeon Kids' Choice Awards for Favorite Book. Four movies based on the series have grossed nearly $300 million worldwide. In addition, Time magazine has named Kinney one of the most influential people in the world.

Beginning his career as a comic strip creator who was unsuccessful in getting syndicated, Kinney spent six years developing ideas for Diary of a Wimpy Kid before it found a home online in daily installments. In 2006, Kinney signed a multi-book deal with Harry N. Abrams, Inc. to turn his project into a print series.

Kinney is also the creator of Poptropica, named one of Time magazine's 50 Best Websites. He spent his childhood in the Washington, D.C. area and moved to New England in 1995. He currently lives in Massachusetts where he, his wife and two sons own a bookstore, An Unlikely Story.